SihanoukVille's seen a lot of action this summer.

Lots of tourist from Europe, Australia and North America (not so many Mexicans) came to enjoy the rain, and surprisingly a lot of sun.  Also, several (more than a few) cruise ships docked for daily excursions.

Sokha Resort and Independence Hotels are both finishing up major expansions for the coming Winter.

Sadly, we lost part of Otres Beach, but it should be replaced with an amazing garden sometime in the next several years.  Independence Beach, outside of Independence Hotel is now open, and sports a new garden for about a kilometer stretch.

Some new businesses opened recently are:

Construction continues all over town on new hotels and restaurants, housing and condo developments, and business parks.

The road to Bokor Mountain, and hour outside of SihanoukVille is almost complete, and when opened will lead to a Billion dollar plus resort with casino, golf course, several theme parks and other attractions.

Kampot town, an hour and a half from SihanoukVille is benefiting, and the town has been upgraded with new roads, street lights, walkways and gardens along the riverfront.

And SihanoukVille's sister seaside resort of Kep is still a sleepy, hilly, town on the beach, but also undergoing an upgrade as well.  The crab market on the seashore has been fixed up, and several new first class bungalows, (and tree houses) are now secluded in the hills.


Koh Kong, one of the top entrance ways to SihanoukVille, on the Thai border, has fixed up the riverside district, and is growing as a base for trips to the mountains, riverside and jungle. 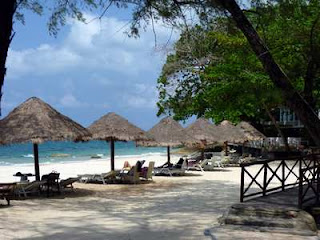 Other than that, life continues.  Now is the rainy season until the end of October.  Lots of clouds and rain, with some beautiful days in between.  Winter should be beautiful, cool days (for Cambodia) from the beginning of November 'til the end of February.

Looking forward to your visit soon!
Posted by SihanoukVille at 12:42 PM