Every room in SihanoukVille's hotels will be filled (you'll want to make reservations if possible), the beaches and islands will be filled, and everyone will be having a great time! 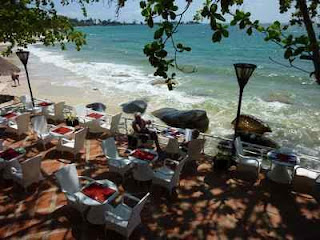 Some new happenings around town....

Sou Ching Hotel  is newly renovated next to the Vietnamese Consulate


Home Sweet Home  is open near the Vietnamese Consulate

Les Merlus restaurant just opened at the old Les Rougets, (which has moved to the old Blue Frog Guesthouse)


Sahara  and Safari Bars opened up on Victory Hill

Snooky Beach opened up at the end of Ocheteaul Beach, a restaurant and guesthouse.

So Ngoung Hotel is open by the Port

SihanoukVille's coastal sister city's of Kampot, Kep, and Koh Kong will also be booming, and Bokor Mountain National Park will be open for the New Years Week.
Posted by SihanoukVille at 11:44 AM